It was a Sunday afternoon and the sun was shining. There was a beautiful blue sky with not a single cloud in sight, a perfect spring day. People started to gather for a family day of fun at the park in Foxfield. Side stalls were set up doing various things, there was a raffle stall that was raising money for a local cancer charity, tombola stall that raised money for the local animal sanctuary, and a cake stall selling lovely homemade cakes and biscuits for the church roof. Children got excited to guess how many sweets were in the jar as the winner got to keep the jar of sweets. There were also hoopla and hook a duck and darts where you had to hit a card to win a prize.

The men all decided to have a competition between them to see who was the strongest by hitting the target with a large hammer and ringing the bell. More dropped out each round until there were just two guys left. A large crowd had gathered by now and it was two guys from the local gym that we’re going head to head. Friendly banter was made to try and put each other off. The crowds cheered equally for both guys as they were very popular within the community. It was the last chance for each one to prove who was the strongest. Tim went first but didn’t manage to ring the bell so it was left to Jay to prove he was stronger. A big swing of the mallet and “ding” he did it. A massive cheer was heard all across the park, there was no prize it was just for fun.

A small fairground had come along with rides for the little ones. Both mums and dads could have fun with the kids on the slides. Everyone was having a great afternoon and lots of money was also being raised for local charities. The woman’s guild put on a drinks stall providing tea and coffee for the adults and orange and black currant squash for the children. 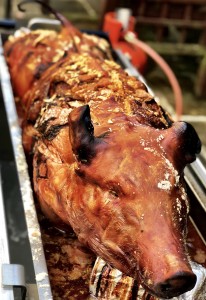 We at Hog Roast Foxfield were asked to provide the catering. We decided a whole pig slowly roasted until tender would be ideal and also a lovely side of beef cooked to perfection would be just what was needed. We thought rolls would be perfect filled with tasty cuts of fresh pork or beef. Sauces were to accompany the meats with apple sauce being the favourite. A crisp fresh salad was laid out to go alongside the meats. Everyone was feeling hungry and as our chef started to carve the meats a queue started to form.

At Hog Roast Foxfield we have our own catering staff who will fill the rolls with the chosen meats and serve it to you. With hungry bellies filled and big smiles on faces a good day was had by all.