It’s not often you see an oche and hog roast in the same room but they were both the centre of attention at a darts competition in Hindley Green at the weekend.
Over 200 competitors took part and they were fed a fine feast of hog roast Hindley Green barms to help keep them on their feet. 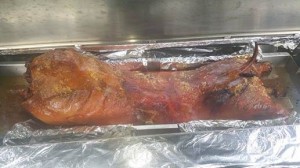 Ash and Anna from the hog roast Hindley Green team stepped up to the double to cater for the sponsored darts competition. They did a wonderful job, keeping the queues moving quickly, feeding the players from the pub teams and their guests throughout the day, from noon until late.
The hog was served with home made stuffing, freshly made apple sauce and specialty golden, crisp crackling. Pies and hot dogs were also on offer to make sure the catering suited everyone’s tastes.