We wanted to share some awesome feedback that we’ve just received from Ellie, our newest member of the Hogmaster Club! Ellie has been running a successful organic street food café for the past couple of years, with an emphasis on substance over style and high quality, locally-produced ingredients. Ellie’s healthy, tasty fare has proved to be a massive hit in her local town, as her establishment is rather unique in the area. Ellie told us she has always been a big fan of traditional cooking methods and in letting her fantastic ingredients do the talking, rather than distracting diners with fussily dressed plates that might look the part but are a let down in the flavour department. She contacted us because she wanted a showpiece for her café and a way of being able to cook in front of her diners and get them interested in not just how the food is prepared, but also where it comes from. 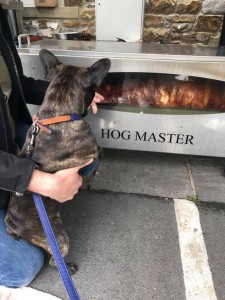 She had been considering investing in a hog roast machine for a while and she had been shopping around but not managed to find what she was looking for. Either the machines were too big to fit comfortably in the space she had or too pricey for her tight budget.

Ellie was over the moon when she got in touch with us and a member of our friendly customer service team extolled the virtues of our superb Hogmaster machine! It ticked all of Ellie’s boxes and then some! Great value for money, easy to use, a huge capacity despite its compact size (it can cook up to 75 kg of pork in one go!) and as an added bonus, it has a glass panel at the front so her diners could see the hog roast cooking! Ellie told us it was love at first as soon as we arrived at the café to deliver it and she couldn’t wait to give it a go. She was also really pleased with the level of service she received and the advice we gave her about where to source the best quality, ethically-reared pork. Ellie told us that thanks to her shiny new Hogmaster, her café is even busier than usual and as well as getting great feedback about the quality of the meat, she is also achieving her other aim of raising her diners’ awareness of ethical practices in food production. Thanks for the feedback Ellie, we’re glad you’re so happy with the Hogmaster!